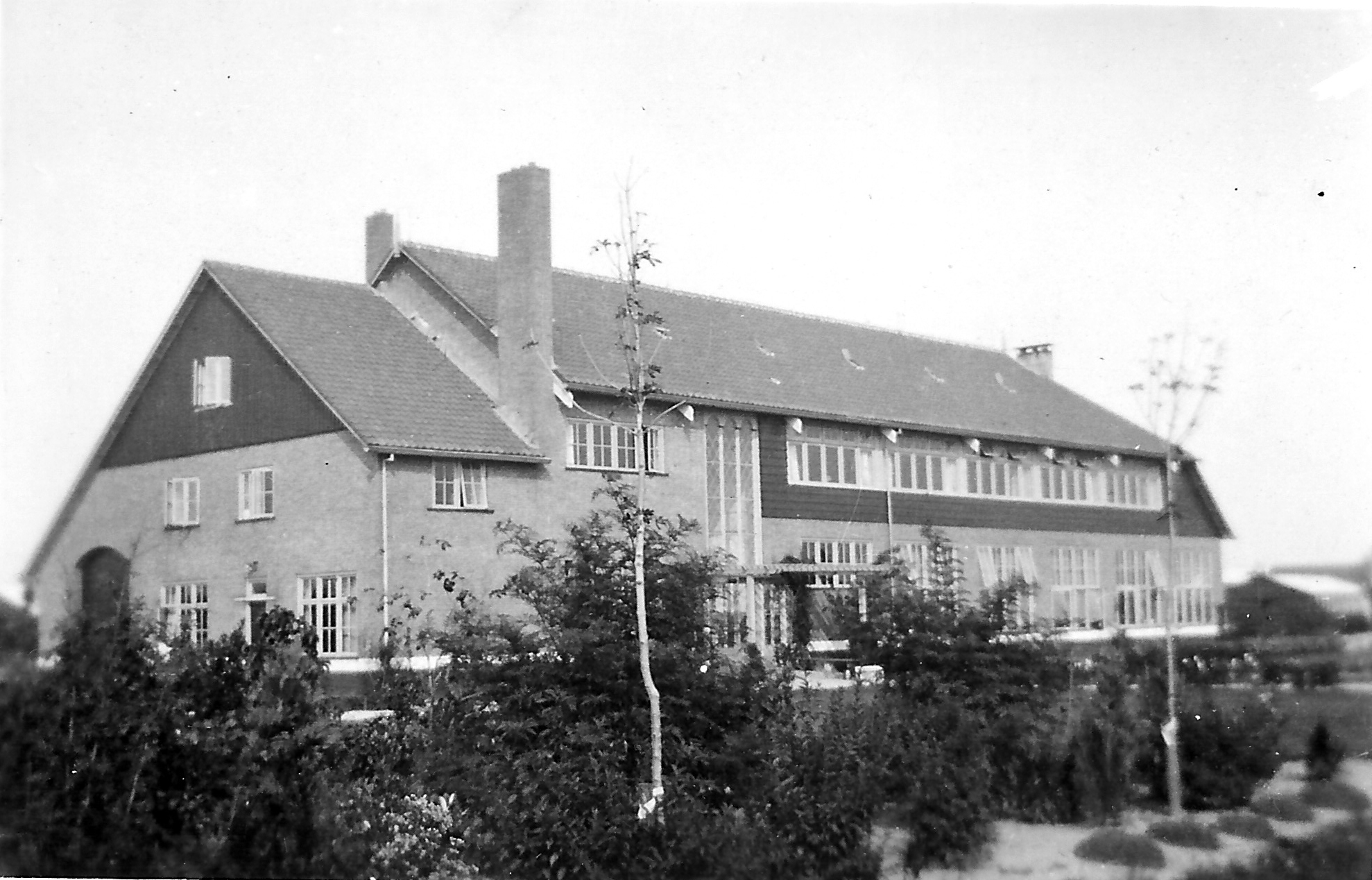 On February 23, 1934, the “Stichting Joodse Arbeid” was established in Amsterdam. It was set up for young German Jews to learn a trade before emigration. The werkdorp was officially opened on October 3, 1934.

The “werkdorp” was not a Hachsharah (a training facility for would-be immigrants to Palestine), contrary to common belief. Most of the young people went abroad, but not necessarily to Palestine. Until May 1940 about half of the inhabitants went to Palestine, the other half to other countries.

From the beginning, some members of the staff did want Wieringen to become an official Hachsharah center, which would have made it easier to obtain Palestine certificates. Other Hachsharah centers in the Netherlands (like the Deventer vereniging) opposed this. As time went by, attempts were made to obtain the Hachsharah status, but this goal was never reached.

In November 1939 the first refugee children arrived here. They were slightly younger then the other inhabitants. It also meant that the population of the Werkdorp grew significantly, from 200 to 300.

On March 20, 1941, the Nazis came to the Werkdorp and took 210 of the 300  students to Amsterdam. 67 The first night they slept in Asscher’s diamond factory in the Tolstraat, the second night they were spread out in the city and stayed with different guest families. About 60 students stayed behind in Wieringen, with 10 of the staff. They remained there until August 1st, 1941. Many of the group of 60 found work with farmers in Noord-Holland.

On June 11, 1941, most of the people of the group who were taken away from the Werkdorp in March were arrested in their homes in Amsterdam, after the board had provided the Nazis with the addresses. The Nazis wanted to round up 300 people as retaliation after a bomb in Amsterdam-Zuid on May 14 and the destruction of a telephone centre at Schiphol (airport), several weeks later. Sixty-one people from the Werkdorp were arrested. They were taken to Schoorl, where four were released. The other 57 were taken to Mauthausen, where all of them died before the year was over.

After the arrests in June 1941 many host families thought it was too dangerous to house the Wieringers. Most of them were then housed in a house in the Plantage Franschelaan (now Henri Polaklaan), number 13 or in the Nicolaas Witsenkade 14.

“After a short time I went to Wieringerwaard, which was an aliyah camp (68), preparing people. The number one thing we had to do there was to fight water damage. And if there is one thing I think people in Israel did not have to do it was to fight water damage. The land was claimed from the sea and there were ditches, full of water, water. And the cattle was grazing and then they bent over and drank some of the water, but then they got so close, they pushed in some of the land. So we had to go in and build the land back up again out of the canal. Plus – later I worked in the petroleum and gas field – and in Wieringen I had my first experience, with the production, storage and transport of natural gas.

In these ditches, between the land, the drainages ditches, which drained back into the Zuiderzee, you had methane bubbling up, that was swamp gas, which is methane. And there was a system in which they put bells upside down on top of that. They had valves, and if there was water in there they’d close the valve. And then the gas bubbling up lifted the bell, which had a corner weight to make sure it was going straight and then there was hose connected to that valve and since the connection was on top and the gas was on top through that hose they could take the methane and put into some pipes which were used for heating and cooking and for other purposes along that line.

We also worked on normal agricultural things. They had big mounds of beets, which were covered during the winter with straw. But then at the end of the winter when there was nothing for the cattle to eat we had to take those apart and these beets got moldy and they stank, but the cattle enjoyed them. We took it to the animals in a wheelbarrow. We had cattle, we tried to have horses, but there was something in the grass, which was not good for horses so the horses did not survive. They had chickens and goats and all kinds of animals. In the garden there were carrots and all kinds of vegetables. We had to work on that. There was little academic training. It was either handicraft and mechanical things or agriculture. I tried to do mechanical things as well. Sometimes you had little choice in what they assigned you.
They took us on trips several times. We used to go to the youth hostels that were designed for young people, they took us to the shore, near Den Helder, that must have been in the spring of 1940, we had a chance to swim in the North Sea. I don’t recall having gone swimming in the Zuiderzee.” (69)

“In Wieringen you really learned something, we had a real teacher there, Mister Verdooner, he had worked for Fokker, the airplane maker, he really knew something. We were taught in theory, and technical drawing. I wanted to become a fitter, Schlosser, and that was possible, there was a workshop. During harvest time one had to work in agriculture, but my main occupation was to learn to become a fitter, including some theory. Descriptive geometry, that really taught me something. Even later, when I was CEO at Philips, it was of use to me: I was able to walk through the drawing rooms and say “why do you do this like this and not like that?” Wieringen was by far the best of all the refugee homes.

It was really big, we lived in barracks: one barrack housed seven people. Every barrack was divided into three apartments so there were three under one roof and per unit there were seven people. We, the children who came there a bit later, we were put up in a communal barrack, where it was so cold during the winter that the water in the sewer would freeze: you had to chop it open before you could wash yourself. There were boys and girls, but they slept in separate quarters: there were boys barracks and girls barracks. There were only Germans there, no Dutch. We were not a hachshara (training people for Palestine), I cannot emphasize that enough. It was also a hachshara, but most of the people from Wieringen went to all the countries in the world, the biggest bookstore in South-America, in Cochbamba, Bolivia, was established by Werner Guttentag, an old-Wieringer. They went around the whole world, but there were Zionists as well.

I did do some agriculture as well in Wieringen: we grew beets, we had to harvest those at a moment the ground was really hard, almost everyone got tenosynovitis. We also grew flax. We fertilized as well, once I got under the manure tank. It was empty, but I still broke my arm. That never really healed. There was a doctor there as well. He was not Jewish; he was a communist and a decent man. He was learning to become a cabinet maker, he was there with his wife. Those crazy Germans: during the war he had to join the army, in the end they let him control an armory in Amsterdam. He gave weapons to the underground movement.

At night we had lessons. I was about the youngest there. There was a student from Vienna, Emil Wessely, he studied math, I think he was almost finished. Every night I would join him behind his books for about two hours. Because of that I hardly lost any time in my education. (70)

Hajo Meyer described the Werkdorp in a letter to his parents shortly after his arrival on 20 November 1939:
The Werkdorf is a modern farmhouse, with all imaginable machines and even 2 tractors. There is also a nursery with greenhouses and all the bells and whistles. Then there is a locksmithery with 3 turning lathes, 2 milling machines, a fast planning bench, a planning bench, manual and electric welding equipment, drilling machines and forging equipment. Then there are a carpenter shop and a bakery. I think that is it. The vegetables we eat are grown here and bread is baked with flower produced here of course. A lot of what is harvested is also being sold. The yield is getting better each year since the earth is still quite new. However, we are not yet entirely self-sufficient for food yet. All in all, there are about 200 boys/men and 30 girls here, with an average age of about 19. For the most part, 7 people share a space, consisting of a cozy living room and a bedroom. Those of us from the Dommelhuis plus another 60 boys who are due to arrive still will be in a separate space though, since we’re all quite a bit younger than the rest. We’re going to be 20 per living/bedroom. For the time being we’re sleeping in one of the barracks but don’t have our own communal room or even closets yet. That’s just for now though, since we arrived so suddenly.
–OK, let me tell you more about when we arrived: When we got off the bus, there was a film crew, filming for the weekly news channel. We then had lunch. The food here is amazing, especially compared to the other places I have been. We then had a talk with the camp leader, whom we’re addressing informally (everyone here addresses each other informally, even older men of 30 and more!). He told us (the ones who came to be locksmiths, like me), that until those other 60 boys arrived, we would have to help out on the farm, since they did not have enough people. It can be several months until we get to go to the locksmithery. But in short, this is a great place for me. We then talked about what we have and are missing in terms of tools.
My daily schedule looks approximately like this:
Get up at 6am; be ready (washed/dressed) by 6:30am. We can shower if we want to. At 6:30am there’s coffee and at 7am we start to work. Morning break is at 10am and lunch around 1pm. At 3pm, we ‘young ones’ get to stop; we shower, change and then start lessons at 4pm. I don’t have details on the lessons yet. We ‘young ones’ go to bed at 10pm. The older kids get to go to bed when they feel like it, as long as they show up to work on time.
(translation: Alexia Gültlingen)