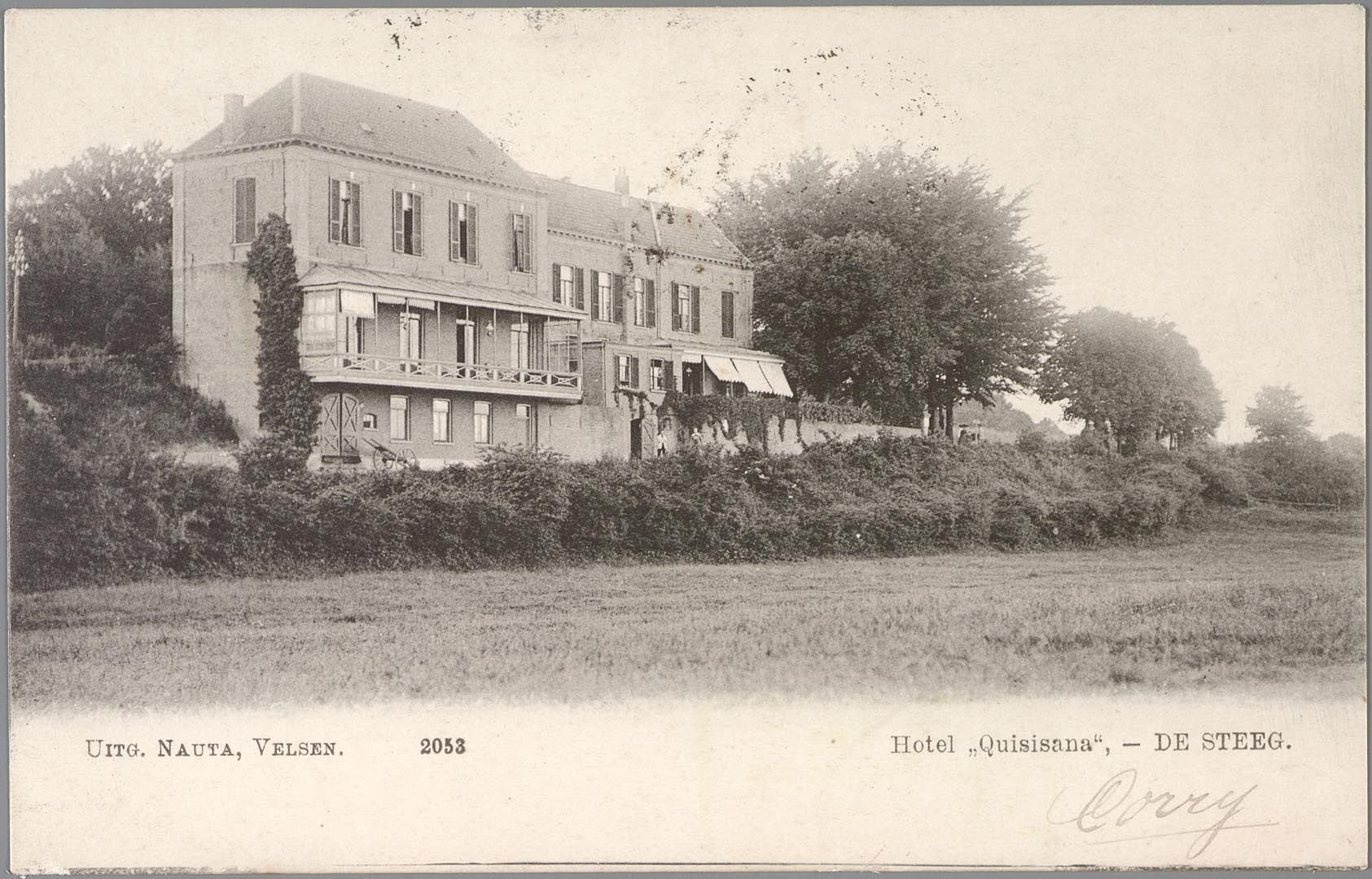 The building served as a bathhouse and hotel until it became a “koloniehuis”. The first group of 45 kids arrived here on December 13, 1938.

In March 1939 there were 30 boys and 38 girls, most of them under 12: it could house 80 children. It was not suitable for orthodox children, as the food was not kosher.

“The nuns stood in the snow in a little welcoming circle. Behind them spread the solemn Rivierenhuis of de Steeg, a children’s resort, not far from Arnhem. First we were led into a room full of tiny tables laden with toys for very young children. Our names were called one by one, and after handing over our luggage, we hung up our coats in a peculiar closet. It had rails at various heights, very low to still lower. That was our first information of the shape and height of things to come. Throughout the house, everything – toilets, washbasins, beds, towels, blankets, was scaled down to fit tiny tot sizes up to towering five-year-olds.

We felt like senior citizens. Very few of the thirty kids already there when our group arrived were over ten years old. The eight “Frauleins” as we called the nuns who looked after us, all spoke excellent German, were trained in children’s care and “couldn’t have been nicer,” my diary notes. The Directrice, the director of the home, an older, greyer, stiffer Sister who walked around leaning on a heavy black cane, rated one star; “mostly pretty nice”.

The tables and chairs were midget size, but happily the meals weren’t. But the price of parenthood [Zeller is taking care of a little boy called Ralph, MK] – feeding Ralph on my lap- put me at a decided disadvantage. By the time I was ready for seconds everything was gone. Nor could I play with the others after the meal. No, I had to drag Ralph up to his room to take a nap. [….]

Ralph permitting, I played chess, cards, or checkers with some of the older kids. There was very little else to do in the evening. That first night we all retired to bed and suffering in a newly “opened” room. My bed was made to fit a seven-year-old dwarf. Every time I stretched my legs I dented my skull. All the bedrooms were unheated. They didn’t seem to know about featherbeds in Holland either, and the two thin midget blankets we were given failed to prevent us from freezing to the mattress. There was a lot of healthy fresh air in the room, admitted by rattling windows with unsealed gaps. The icy wind entered in gusts that constantly threatened to extinguish the flame of the candle that burned under the plaster statue of the Madonna and child in the room where Norbert, I and three others lay shivering.

The cold and the candle kept me awake. I was also worried that Ralph might wake up and cry. It had been tough, getting him to sleep. He kept on holding my hand and staring at me. Maybe I should learn some lullaby.

“Damn it, I’m Jewish and I’m freezing,” said one of the boys, who jumped out of bed, and stomped out of the room, barefoot, wrapped in his blanket. I did not quite know how to reconcile those two statements. Did he mean Jews shouldn’t be made to shiver?

“I had to go to the Directrice,” came a voice out of the dark. “You should have seen the look she gave me when I told her that the candle on the Madonna was against my religion.”

The next morning the kids next door showed us a former glass of water on their windowsill. During the night it had been transformed into a clump of ice and a dozen glass splinters. I too nearly turned into a clump of ice, on my knees in the unheated bathroom, washing myself with cold water. They had no warm water, and there was a line for the higher sinks.

It was Saturday and we met for prayers led by one of the older boys. The nuns looked on benignly, the head sister sternly. She always looked stern, even during breakfast in the dining room with the big windows that looked out on a lovely hilly landscape with a winding river, group of pine trees and a red rising sun reflected in the snow. Every face glowed as we wolfed down the delicious buttered white bread strewn with chocolate flakes or flowing with honey. I thought the Dutch were absolutely the most civilized people in the world…. Chocolate flakes on bread and hot chocolate. Even on ordinary days.[…]

One aspect of being away from home did make itself felt that evening. It was Chanukah, but this year there were no presents. There was, however, a menorah, and when we lit the first light we were celebrating our own liberation”. (49)