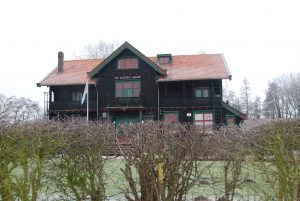 Built as a hunting lodge in the 1920’s, it was used for German refugees between January 1939 and the fall of 1941, but probably only in the winter.

Morris Schnitzer was here for a while:

‘The hostel was a recently constructed building occupied only in summer. Its facilities were just right for us but we couldn’t stay here long. With summer approaching, youth hostellers were expected and we had to move again.

We were given no schooling: we passed the time doing nothing. I had lost the opportunity to write the Cambridge exam but I tried to continue learning something. I studied Italian and a few other things on my own – anything I could. Classes were started but they weren’t well organized: we lacked essential texts and were never in one place long enough to make any headway.

In Deventer I did a little gardening in the spring. I tried to learn the garden; I was bursting to learn something or do something. There was trade school in the town and after repeated attempts I succeeded in getting my name on the list to learn plumbing: it seemed to me a useful skill to have. But before I could start apprenticing, I was moved again. (40)

Martin Oswald stayed here with his brother between January 1939 and late February 1939. He recalls:

“I remember that we celebrated there on January 31, 1939, the first birthday of Princess Beatrix.

My memories of that time are very pleasant.  We did not have much contact with Dutch people, but we were taken good care of and the personnel were very kind.  By order of the Committee, all food was kosher, and there were separate dishes for milk and meat”. (41)