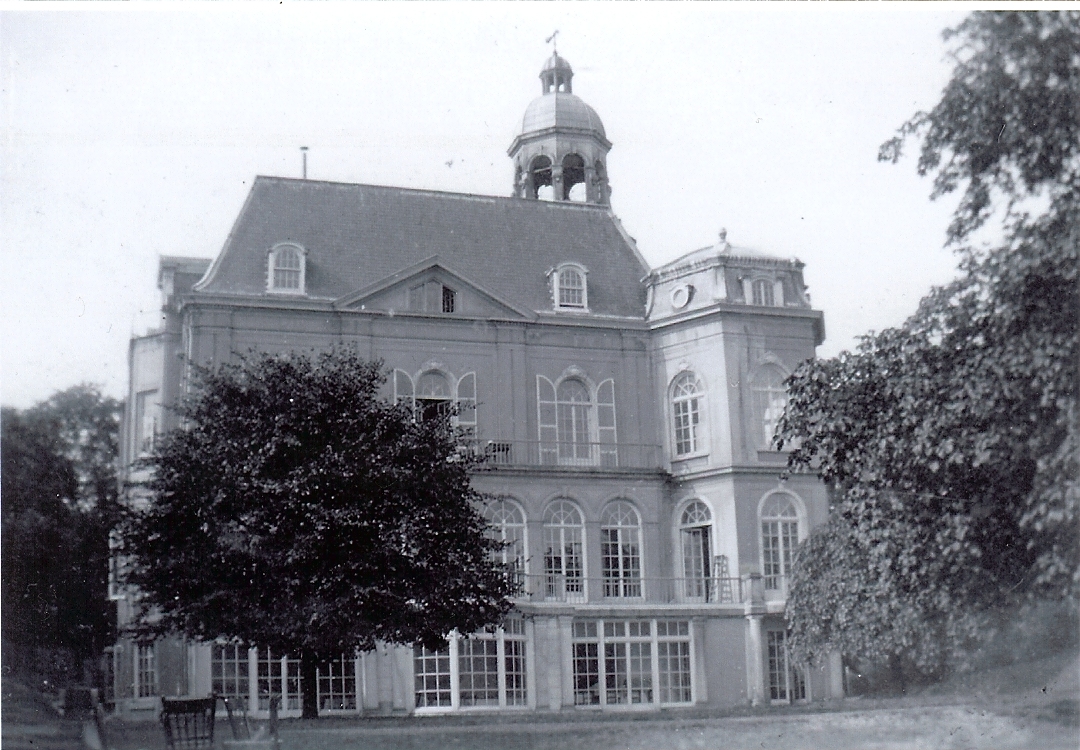 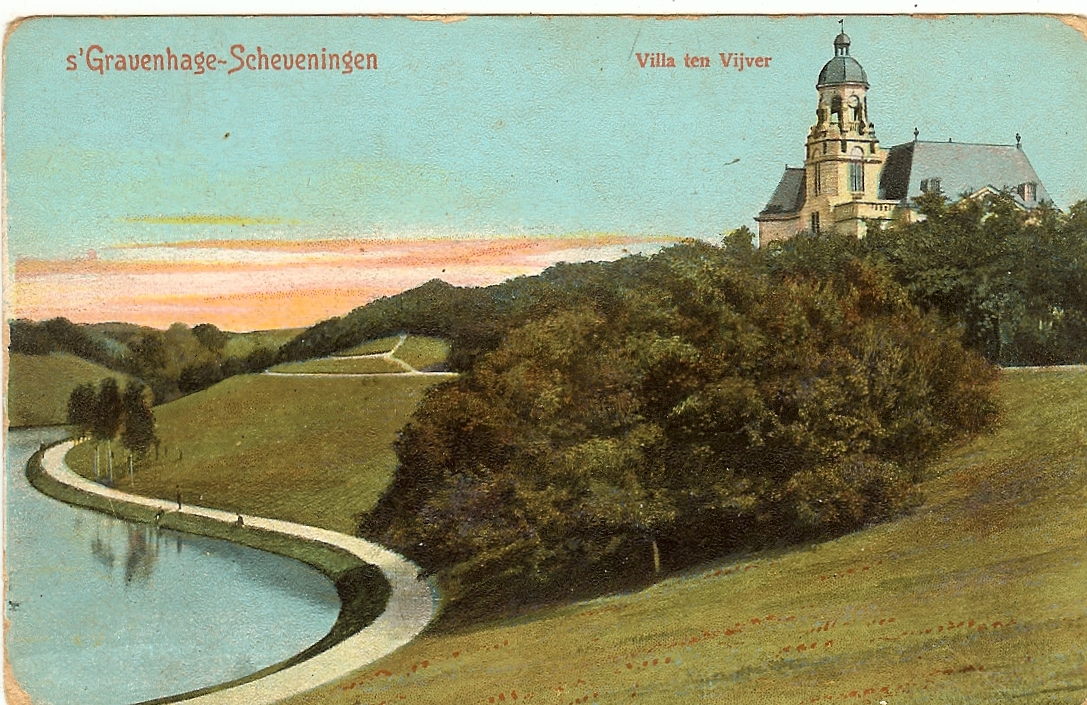 In 1901 Anton Kröller bought “Ma Retraite” as Huis ten Vijver was then called, after he had just bought the neighboring villa “Paulina”. Architect Leo Falkenburg completely redesigned both villas. Villa Paulina was transformed into stables, including a haystack, and two living quarters for servants, which could also be used for guests. The main villa was torn down and rebuilt in neo-classical style. It had double stairs leading to a terrace, and a round clock tower. The villa had many rooms, including rooms for servants in the attic. A real novelty was a bathroom. The Kröller-Möller family lived here from 1902 and 1916. (21) In 1921 the villa was bought by Sigismundo Edelstein, who was a grain
dealer in The Hague and Buenos Aires. He owned the villa until 1944.


During the time she was living here, Helene Kröller-Müller started collecting art, thus laying the foundation of the collection that would later find a place in the Kröller-Müller museum in Hoenderloo.

In January, 1939 three homes for refugee children were opened in and around The Hague, but this turned out to be very costly. Already in April of 1939 (NA 2.09.45 – inv 70) Huis ten Vijver is mentioned, “in case of an emergency we could use this house”. But central heating and water were not in order, as the house had not been used for a while.

In May 1939 it was Julius Flegenheimer who offered the Ministery to use “Huis ten Vijver” completely free of charge. Julius Flegenheimer was probably a business associate of Sigismundo Edelstein, as he was a grain dealer as well. In the summer of 1939 Mr. Flegenheimer left the Netherlands and went to Argentina as well.

Because the house had not been used for 20 years (NA 2.09.45 – inv 70), it had to be renovated slightly – among other things the central heating had to be fixed – but could then house all 150 children of the other three homes. In September, 1939, the first refugee children moved in. Apart from the main house there was also a coach house, where the boys slept. There were mostly older girls here, but also some boys and younger children. The kosher food came from a hospital in The Hague. But already at the end of May 1940, shortly after the invasion, the Nazis decided that all the children had to be evacuated from this house, as it was very close to the sea and the Nazis wanted their hands free there to fight possible landings from the Allied forces.

In 1943 the villa was demolished for the construction of the “Atlantikwall”.

“Huis ten Vijver” was such a beautiful house, it was like a palace and I thought it was very special to live in a palace”.  (22)

“Huis ten Vijver” was a big house, and people said it was the biggest and most beautiful villa in Scheveningen: it was very special. There was a second house as well, that had been built for the staff, and adjacent to every room there was a bathroom: Huis ten Vijver had 17 bathrooms. Everything had been made of the most expensive material, doors were made of wood, the windows were made of … glass, more than 1 centimeter thick and cut on all sides. I’m telling you this because on May 10th, when the war started, at night, a piece of a grenade, a splinter, went through our window and got stuck because the glass was so thick. It did make a hole, in the corner of the window. I do not think it was German shrapnel, because the Dutch were shooting at German planes and they did not have any experience. When the war started all the children were taken to a basement in the small building. The small building had a big basement, because all the machines, like the washing machines, were there”. (23)

“The ‘dump’ is Huis ten Vijver, where the refugee committee moved the children during the summer, consolidating several refugee homes under one roof to cut costs. Ten Vijver lies in the Scheveningen Woods, one if the ritziest sections of The Hague. It is the largest amongst the large estates in the neighborhood. The owner, a government official in the Dutch West Indies, has put it at the disposal of the homeless refugee children from Germany.

The estate is huge. It’s named for the large pond at the edge of the grounds. Awed, Hanne marvels at the opulence of her new home. Gaudy, right out of the fairy tales. Or Hollywood movies. She gapes at the Rococo-style paintings on the vaulted ceilings in the dining and living rooms of the mansion.

Rose-tinted shepherds and shepherdesses survey, from their lofty heights, the strange creatures that now occupy their gaudy territory. Smile in dainty unconcern down on the stateroom, suddenly degraded to sleeping quarters for German refugee children, where clunky wooden Red Cross beds have replaced the original, delicately curved period furniture. Wooden squares, covered with straw-filled hemp sacks as mattresses on which suitcases and small personal belongings of all kinds and shapes give themselves airs. Wet towels hung out to dry on the top part of the wooden frame.

Chubby cherubs and cupids float on pink-edged clouds on ceiling and walls, indifferent to the dank smell of fresh straw that permeated their building these days. At night from her shifting, settling straw sack Hanne stares at the images from an era far removed from her drab, musty reality, wonders about the owners of the mansion and the people who built it, marvels at their world, their life, their concerns. (24)

Marianne Weil (Mannheim, 1923) had just moved into Huis ten Vijver when it was time for Pesach cleaning. She describes this to her mother:

“Last week we did the spring-cleaning already for Easter. That means before Pessah we do it again, but not so thoroughly. Just imagine: The huge dining hall, 4 girls to do the work and a lady in charge, who also helps a bit. We swept the ceilings, washed the walls with water and ammonia (white painted walls), soaped the window and door frames and polished the windows inside and outside, cleaned the radiators thoroughly; the marble pillars and decorations cleaned with a leather; all chairs and tables scrubbed, table tops waxed; cupboards waxed and. the handles polished and the marble floors (white floors) scrubbed. Now I want to convey to you an impression of the atmosphere. We, the four of us, armed with window leathers, scrubbing brushes, brooms, Vim, soft soap, buckets and other battle utensils with which one can attack the dirt, stand ready to clean everything thoroughly. This roll call takes place at 8 o’clock in the morning. (Describing this to you, makes me think of the articles one used to read about servant girls!) Uniform or training trousers, old shoes, even older stockings, navy blue sweat-shirt or pullover, headscarf and apron. Very proper, ha !?!?!?!?! Then, when we start washing the walls or the radiators, the floor is soon under water and we exchange our shoes for clogs or wellingtons (rubber boots). Two girls start at the part which is undergoing the cleaning bath and the other two are dealing first with the other parts. At about 11 o’clock (at 10.30 is Vesper, 2nd breakfast or tea break) the great battle begins. The enemy is the dirt which advances into the most secret hiding places. We crawl after it on all fours, but we manage to catch it. Ha, it’s not funny: what we do, we do thoroughly (…hm – hm!).

At 12 noon we quickly eat our sandwiches and then we mount our ladders or window¬sills again; yes, when monkeys climb, it is a sign that there will be good weather! At 3.30 we finish, the hall is shining and we are pitch-black. That is quite under¬standable – quite logical? First of all, we wash and do our hair, change our clothes and are then so tired that we are unable to do anything. If a “sister” goes after that to inspect the shiny hall in order to find a speck of dust, she has to put 4 or 5 pairs of glasses on in order to find anything at all.

“Yes, the girls of the work are very exactl!”

You have a photograph of our house, in the basement the huge balcony with the many small windows. Have a good look at that and think of your daughter who, last Tuesday, the 20th of March 1940, polished all the little window panes. For four hours I went up and down the ladder, like a monkey, but they are clean now. But I only cleaned them from the inside as, otherwise we could not have finished in one day. So, now you know what I have been doing last week. More thoroughly I can’t learn to do it in a labor camp either .” (25)

During Pesach she was sick in bed, but still describes the festival to her mother:

“Now I want to tell you a bit about the Seder (which I did not attend!) During the two Seder nights, there was another girl in the room, who had a cold; so I was not at all bored.

The first Seder was conducted by two gentlemen from Amsterdam, Dutch. All the committee ladies were present. It must have been very nice. We got marvelous food; meaning “marvelous” considering our blunted and gloomy ideas. There was a small glass of wine (in German “Zuckerwasser”), 1 glass chicken soup, boiled potatoes, chicken and gherkins and the dessert was an orange. That was the menu of the first evening. Tuesday morning there was weak coffee, two or more Matzes with Tomor margarine on top and that was breakfast. At 12 o’clock there were boiled potatoes with Tomor melted on top, a hard-boiled egg, one Matze and a glass of tea. At 4 o’clock a biscuit and in the evening was the second Seder. This was held by Dr. Klee (Hilfsverein Berlin). The food was the same as the first evening. During the intermittent days of Pesach: hot food for lunch and in the evening. Lunch is cooked in the house: potatoes and egg or similar. In the evening there is the usual hospital food. The boys peel potatoes, usually under the supervision of the sports teacher.” (26)

With many thanks to dr. C.N.W.M. Glaudemans of the Municipal Archives in The Hague for the information on the owners of Huize ten Vijver! 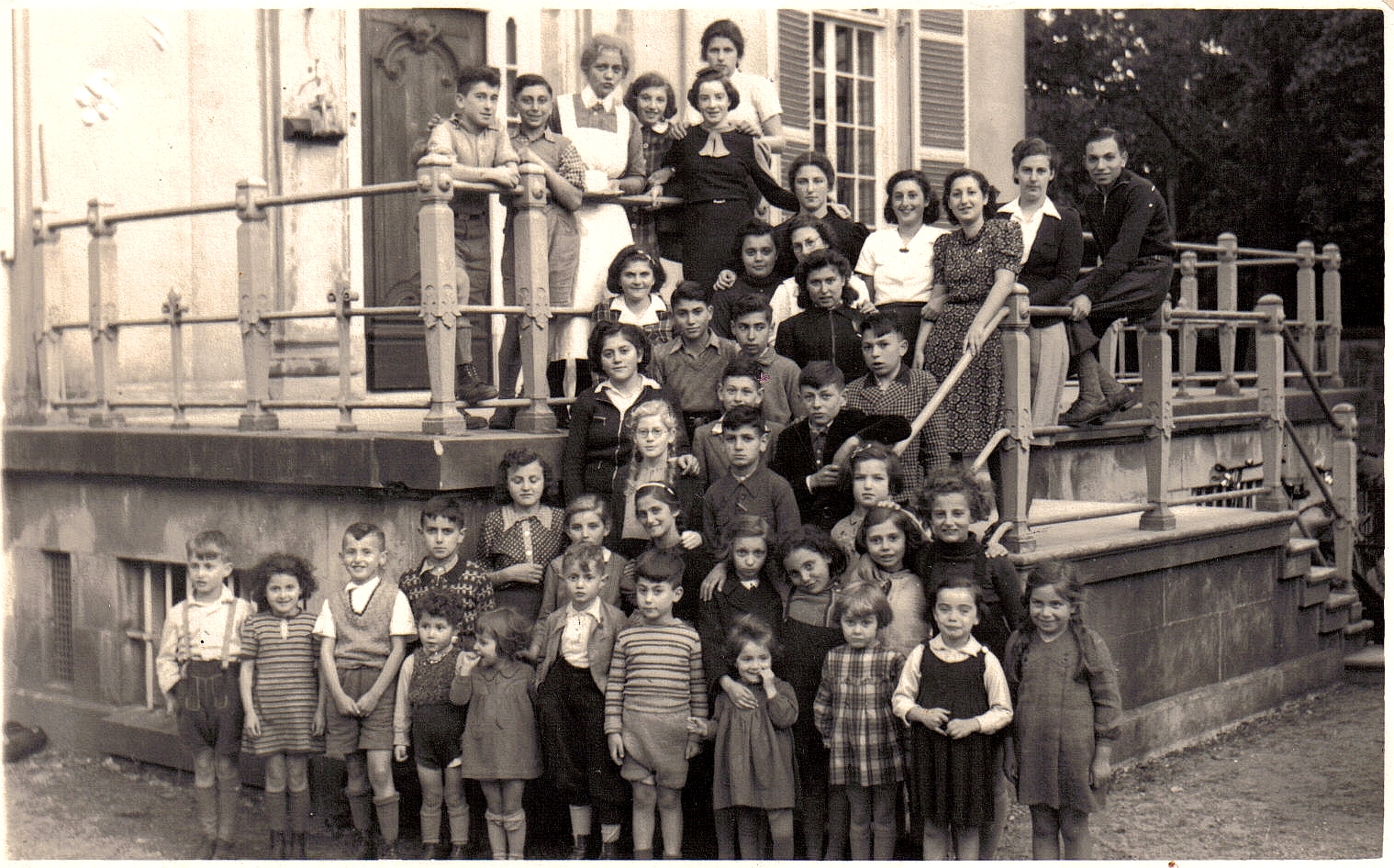