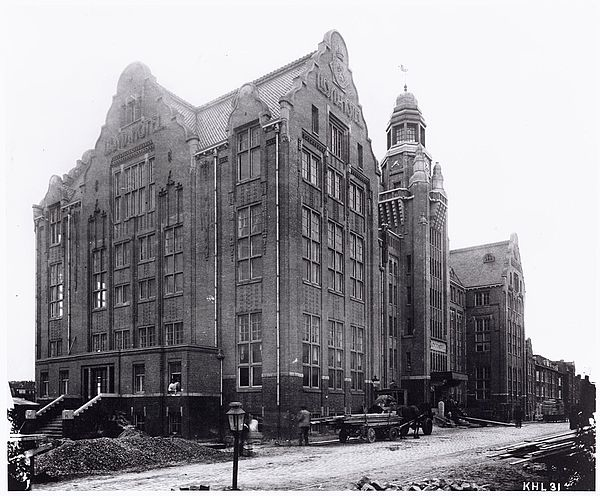 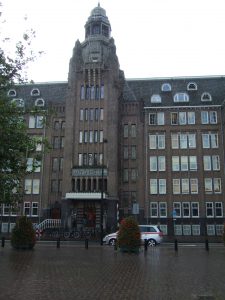 The Lloyd Hotel was built in 1918 by the Lloyd company that shipped people – mainly Jews from Eastern Europe – to South America. This place served as a hotel for future passengers. It could house up to 900 people. The Royal Lloyd Company stopped shipping passengers in 1935, and the building was bought by the city of Amsterdam.

As a refugee camp, starting in 1939, it was used mainly for families, but sometimes children were housed here as well. It was closed unexpectedly in August of 1939, because the government wanted to use it for the mobilization. All the inhabitants then moved to the building next door, Oostelijke Handelskade 12.

After the war it was used as a prison for a while. In 2004 it reopened as a hotel again (http://www.lloydhotel.com/en).

Robert Weil (Mannheim, 1928) had been living in the Burgerweeshuis where he got diphtheria in the summer of 1939. In April of 1940 he was finally declared “negative” and moved to the Lloyd Hotel, a surprising move, as there were no single children in this facility. On April 18th he writes to his mother in London about this move:

Today I want to write you a letter again. In the meantime, you must have received my card with the information that I am in Lloyd Hotel and have been to see Oma (grandmother). Now I want to tell you everything from the beginning. On 13th April came the news (then I was still in the hospital) that I am negative and that I will be leaving, but when one did not know yet. The following day, a Saturday, at 1 o’clock there was a telephone message that I will be collected at 2 o’clock and have to be ready. I still had to eat quickly and pack; a sister helped me with the packing. I still did not know where I was going. At half past two I was collected by a sister from the Lloyd hotel. Now you have to realize that the Lloyd Hotel is a camp in which there are only grown-ups or children, who are together with their parents. One can go out every day. I think that it is marvelous. Then one is also a bit independent. For instance, I go to Oma without accompaniment, etc. I find my way very well in town. One also butters one’s own bread, etc. and is not treated like small children. There are 15 people in my dormitory, mostly young people, who are out during the day.