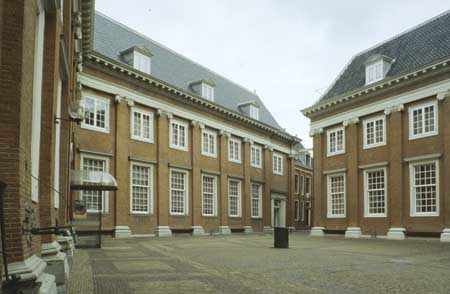 The building had been in use as an orphanage since 1580. Before that it was a cloister and old men’s home. In 1960 the Burgerweeshuis moved to another location within Amsterdam. Since 1975 it houses the Amsterdam Historical Museum, now called Amsterdam Museum.

From March 25, 1939 there were refugee children housed here: most of the children who came here came from the homes in Bergen aan Zee and Wijk aan Zee because those homes where closed. In the summer of 1939 there were many cases of diphtheria: the sick children were taken either to the Wilhelminagasthuis (a hospital) or to the quarantine facility/refugee camp at the Zeeburgerdijk in Amsterdam. Mrs. Wijsmuller evacuated all the children who were still living there on May 14, 1940.

According to a letter from the city of Amsterdam, written in November 1938, it had 75 beds available for refugee children, and this is indeed the number of children that were usually staying there.

In another part of the building there were Dutch orphans.

“I have no doubt that when the Burgerweeshuis was built by the good citizens of Amsterdam in the 16th century, it was quite advanced both in design and intention. But in the nearly four centuries it had gone through since it had shed all of its modernity and much of its lustre. The first impression we got as we passed through its heavy gates, was that orphans should not expect a very bright future, and were certainly not going to have a very glittering present. Perhaps that was the message it was intended to convey. What the institution had not lost was its very strict regime which did not leave its unfortunate regular charges much leeway in their behaviour. ………..

On arrival we were immediately assigned our beds in the dormitories, on two floors of the now Jewish wing of the old building. The younger children on the lower floor, in two separate halls, respectively for boys and girls, and the older ones upstairs. The ancient iron beds with high rails running all the way around them, were all identical and uniformly black. Their colour matched the general gloom and I can but wonder why the management never thought of cheering the place up a little with a few cans of bright paint. Surely 400 years must have been time enough for them to think of the idea. ……….

We, the new arrivals from Hoogeveen with the taste of the toothsome and plentiful food we had enjoyed there still on our palates, had no fear of hunger. But the children who had come to the Burgerweeshuis before us, knew better. They started devouring their sandwiches as though their lives depended on getting them down fast, which as it turned out it did to some extent. We sat open-mouthed watching them demolish their sandwiches and were quickly left behind with our own.

Children learn fast, and it didn’t take us long to realise that speed was of the essence. Whoever finished the two sandwiches on their plate, to the last crumb, was allowed to go for another helping, from a pile in a wooden box on a small but sturdy table in the centre of the hall. The rules were immutable. You were allowed one extra sandwich at breakfast and supper, if you finished your original two. Dinner, which I suppose would be called lunch today, was another story. …..

The food [for dinner] was supplied by the Jewish Kitchen of Amsterdam, and its only virtue was that it was kosher, which however did not atone for its vice.

The Poor Kitchen firmly believed in regularity. It provided seven set menus, one for each day of the week, which never varied during the year or more I spent at the orphanage. We knew every day exactly what to expect, or rather fear, for dinner. It was always bad, some days worse, in immutable rotation.

On the worse days, as dinnertime approached, we started worrying. We must then have looked as orphans in an ancient orphanage presumably should look; forlorn, apprehensive and expecting the worst, which never failed to turn up. We had no way out and we knew it. Come what may in those sinister drums we would be forced to eat it up, to the last nauseating forkful. Perhaps brighter plates and gleaming cutlery might have eased the drudge, but they were not for us.  The setting matched the food, if I may use that word loosely to describe our dinners.

Thankfully I can no longer remember every one of the seven menus. I must have eaten, if forcing food down your own unwilling throat can be called eating, more than 50 times each. I do not regret this gap in my memory. This is where the mind has the advantage over the computer, it can be mercifully selective.

But I do remember that the menus ranged from merely bad to really horrible. They gave a bad name to food. Indeed six of the seven menus were quite inedible, except for the fact that we had to eat them, and despite ourselves, ate them.” (2)

“The special treat we had at the Burgerweeshuis was that we went swimming once a week at the Heiligenweg, an indoor swimming pool, another treat was to go every Shabbat morning, to walk to the Spanish Portuguese synagogue, about a 20 minute walk from here, we always walked all together.” (3)

“Then I came to Amsterdam, to the Burgerweeshuis, that was really terrible. It was awful I thought. It did not seem very big to me. The beds were very close together and the food was bad, really bad. I remember a cousin of my mother, she lived in Diemen and she was not allowed to come inside, so we talked over the wall, and she threw a bag full of plums over the wall, I was so happy with that because the food was really, really bad. It was so strict and severe.

There was a very small courtyard….. It was an awful time. There were only German children, I can’t remember any Dutch children. I met my cousin Annie there, she cried so much. She was an only child, spoiled, very beautiful, a little doll.

Then we had an outbreak of diphtheria, I got it too, and children who did not have diphtheria went on a transport to England. I couldn’t go because they were not sure if I had it or not. One day a gentleman came up to me, he spoke German and had taken a ball for me, I was so happy with that ball, apparently we did not have any toys at all, so I was really happy with it. I did not go to school there. I don’t remember what we did, I don’t think we did anything… Especially at night my cousin would cry and I would comfort her. We slept in the same hall. I don’t think they entertained us during the day.” (4) 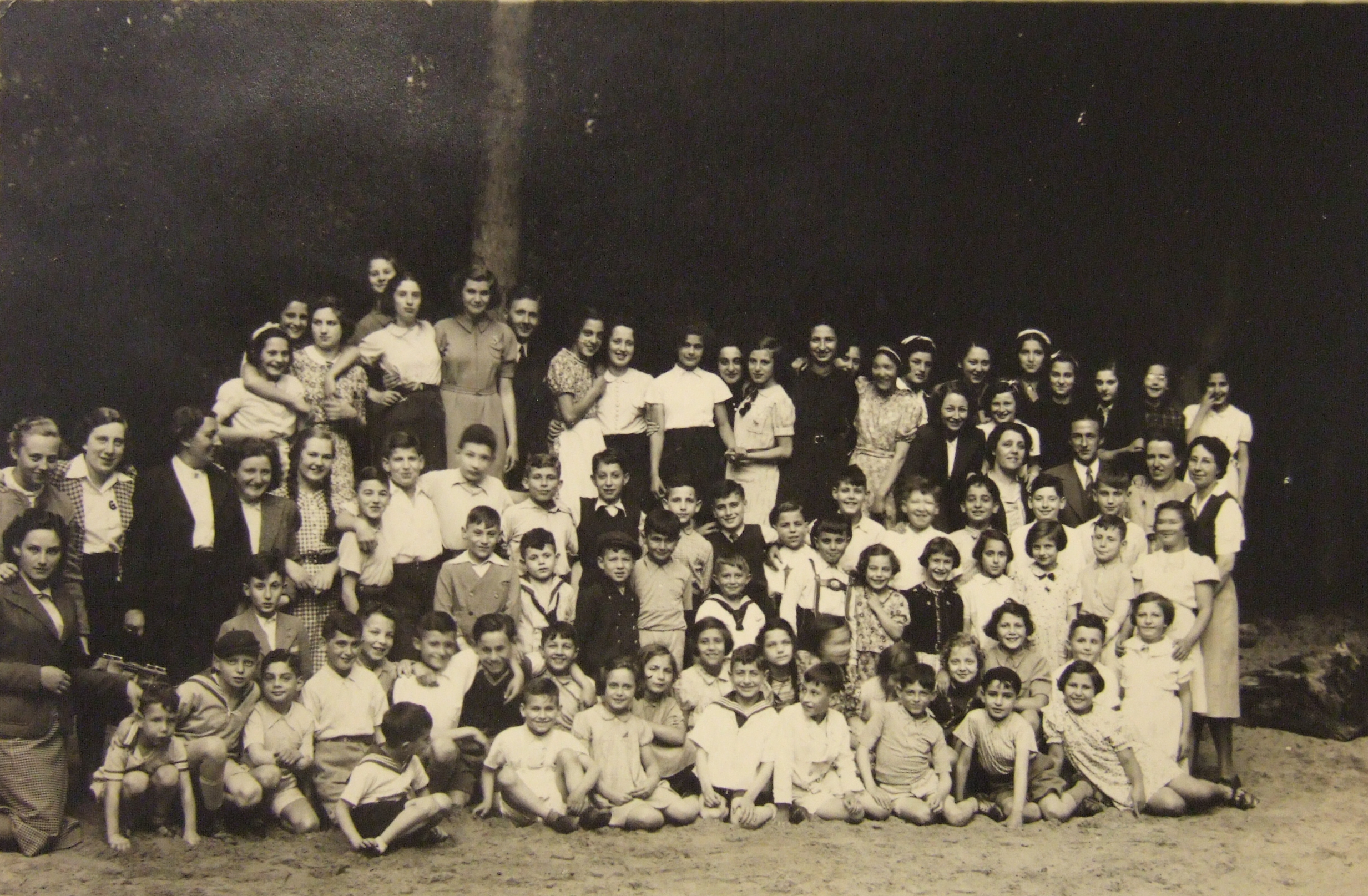 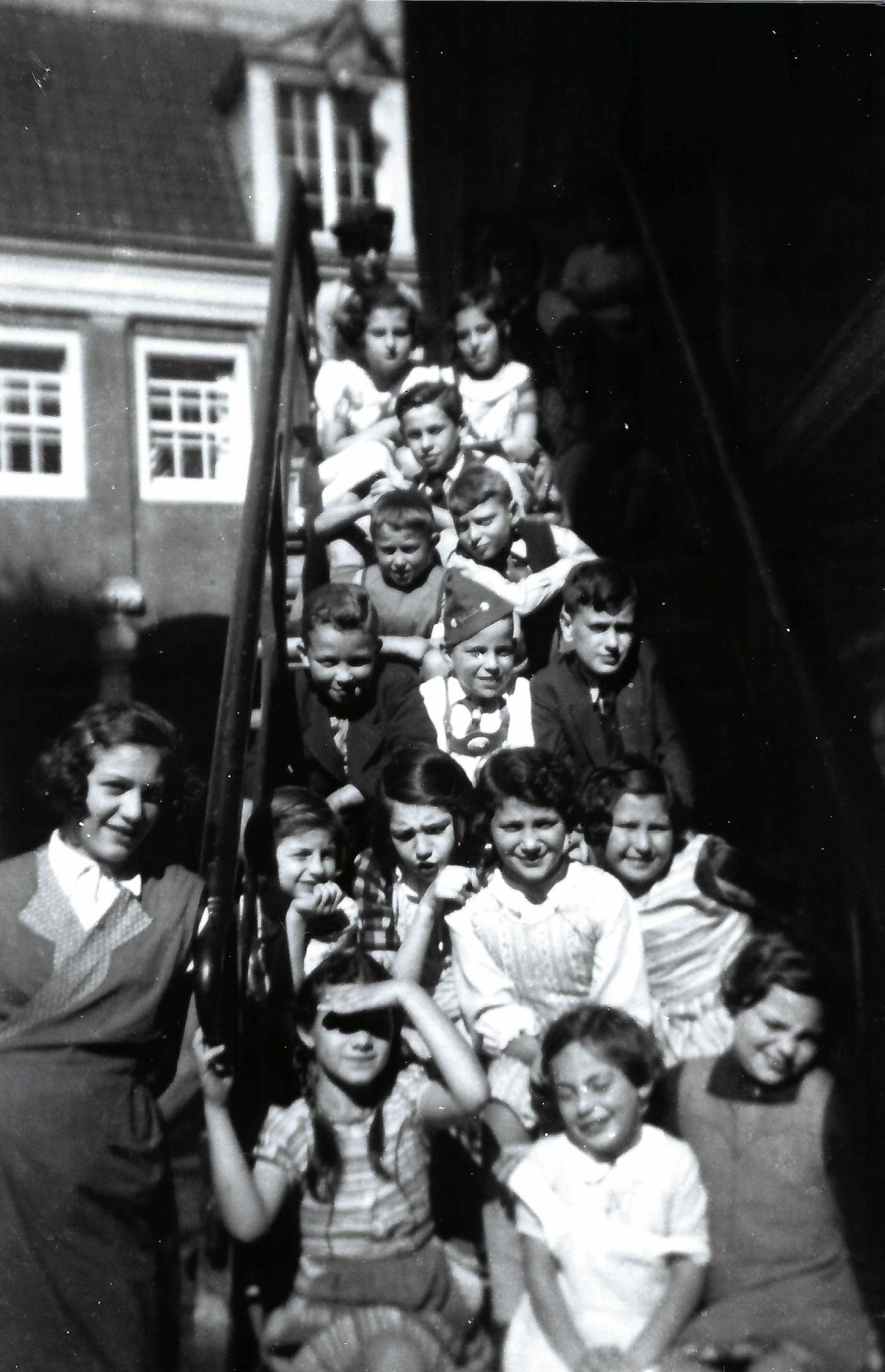 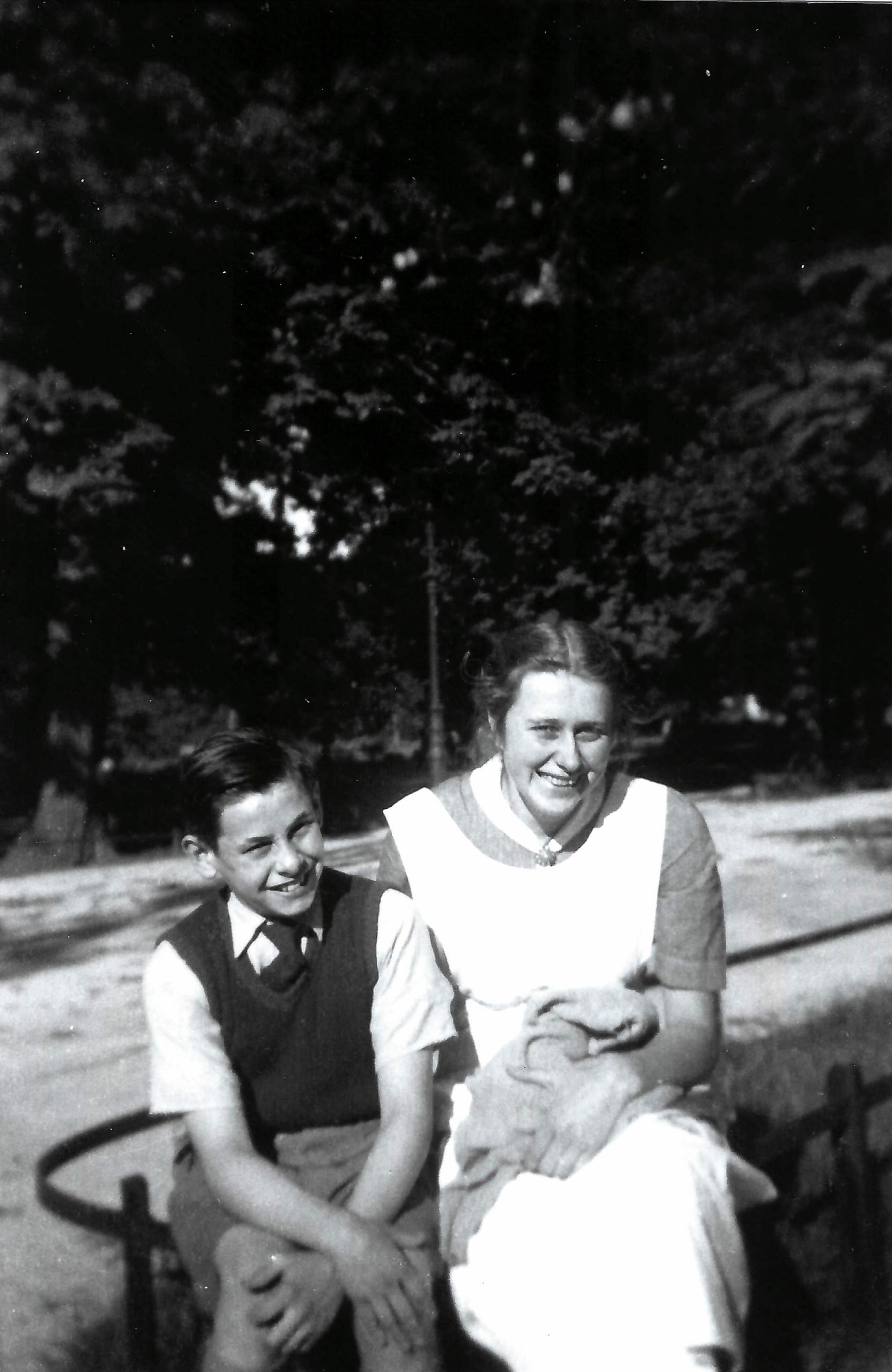 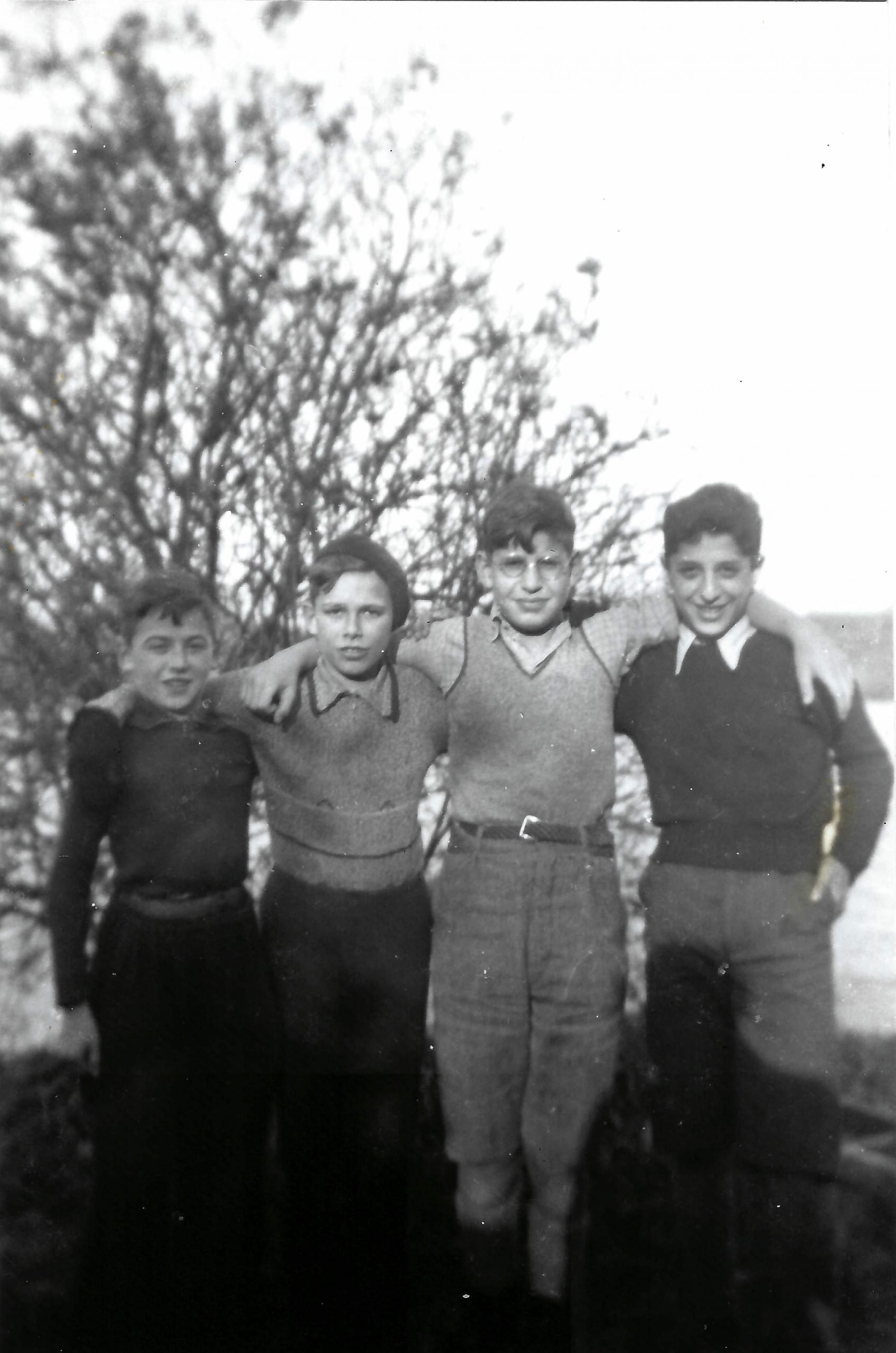 Four boys from Burgerweeshuis, probably in Vondelpark. Second from the right is Robbie Weil. Collection Kouwenaar. 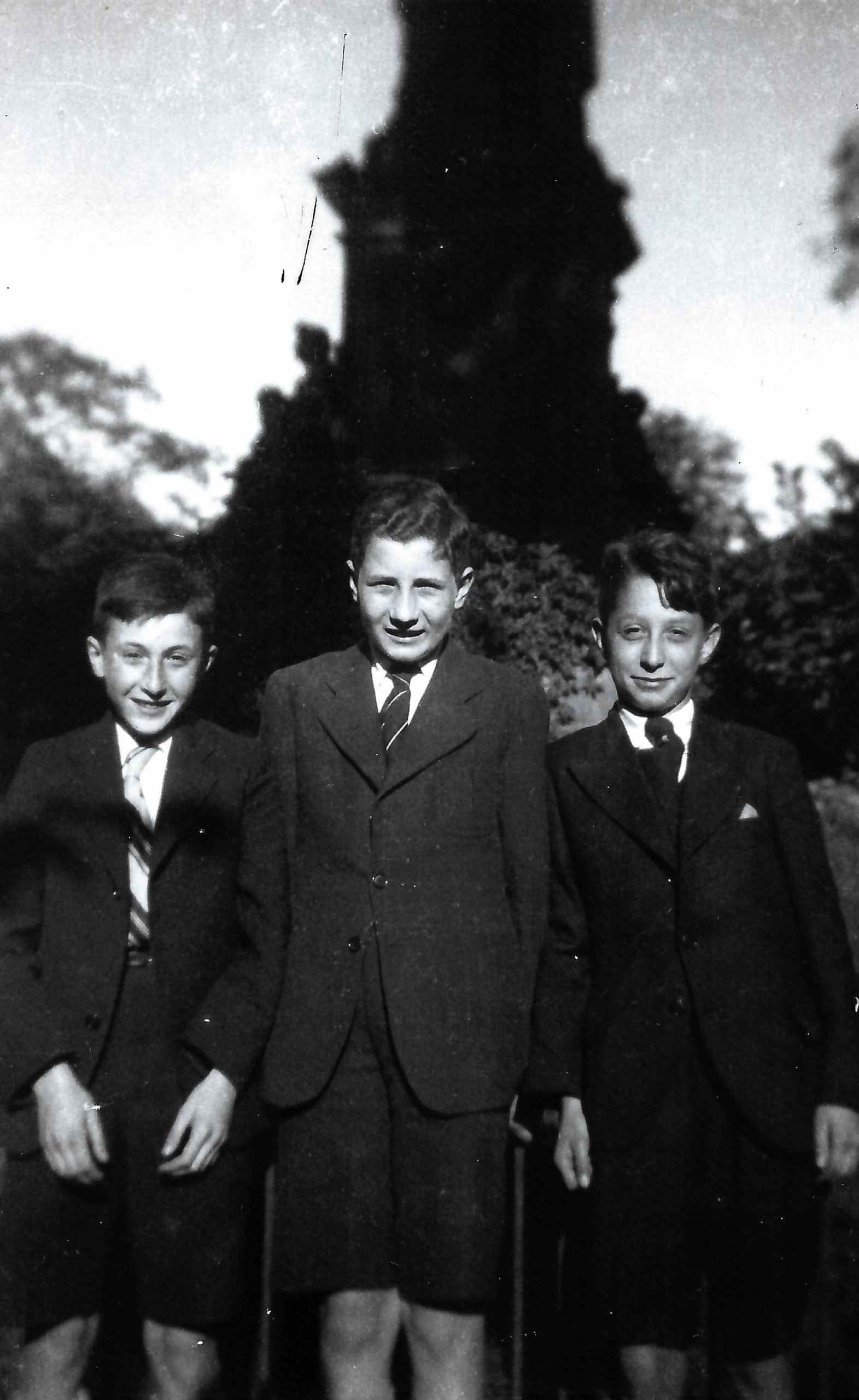 Three boys from the Burgerweeshuis. probably in the Vondelpark. Collection Kouwenaar. 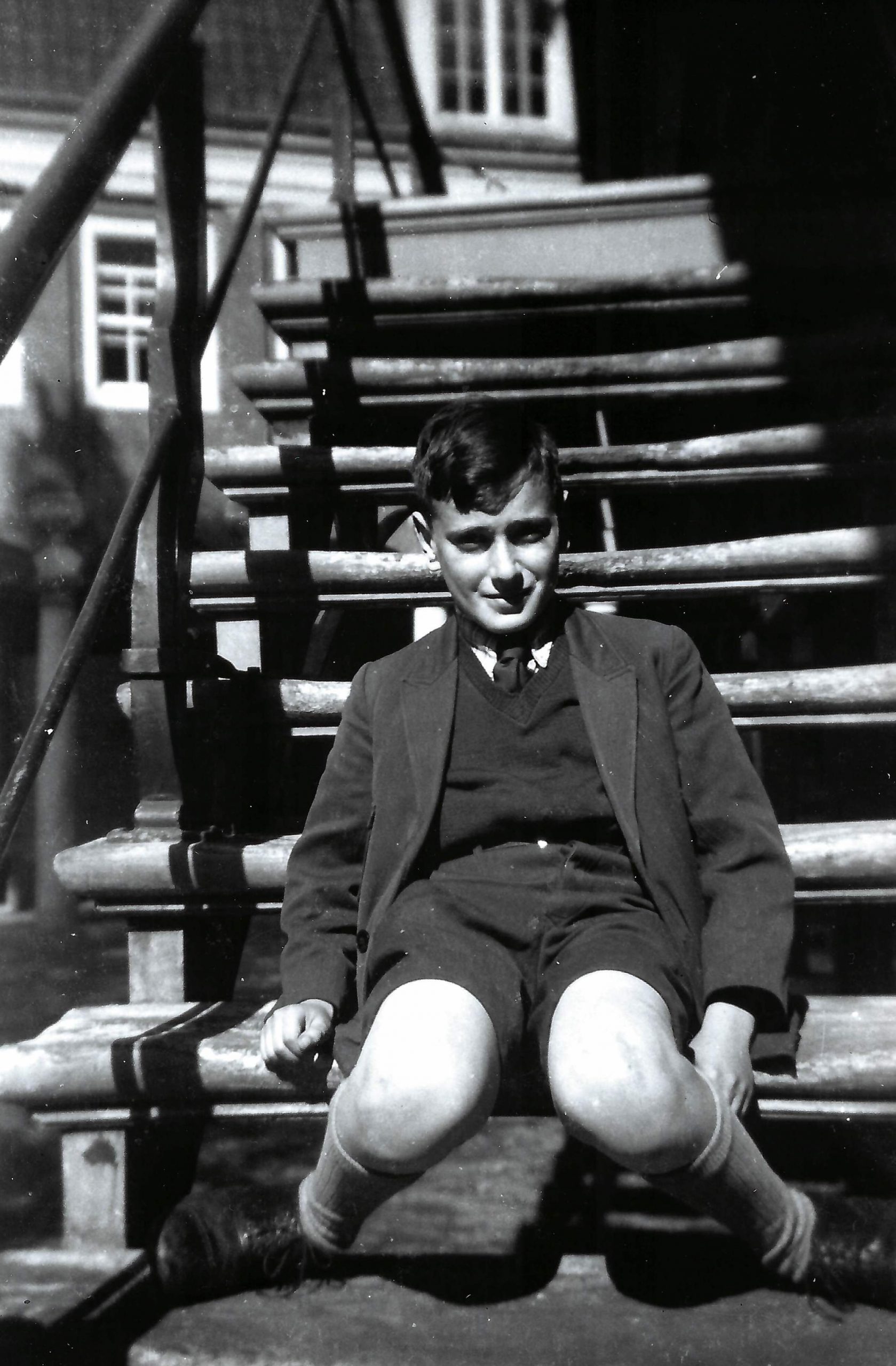