Posted at 15:49h in Uncategorized by Miriam Keesing
0 Likes 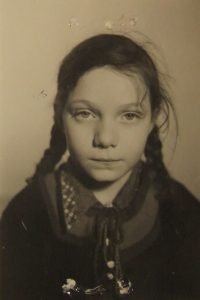 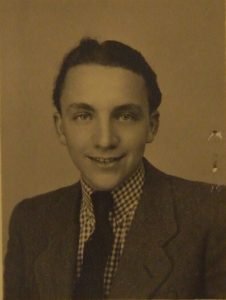 Heinrich was born in Duisburg, on October 10th, 1922. Both his parents were Polish. We know very little about Heinrich. His last address in Germany was Universitätsstraße 32 in Duisburg. He lived there with his parents. It is unknown when exactly Heinrich arrived in the Netherlands, or how. First, he was in Nijmegen for a while and on February 6th he was moved to the quarantine camp in Rotterdam. Even though Heinrich wanted to learn to be a farmer, in September 1940 he was moved to Westerbork, which was still a refugee camp. He was deported from there on the first train to Auschwitz, on July 15th, 1942 and was killed no later than September 30th, 1942.
Mirjam Smuk was born and raised in Essen, only 24 kilometers (15 miles) from where Heinrich grew up. She was eight years his junior. Mirjam’s parents were born in Poland as well. With a bit of fantasy, we can even imagine that Mirjam’s parents met Heinrich’s parents, in Essen or Duisburg. After all, it is not unlikely that people with the same background flock together. Mirjam also fled to the Netherlands, in December 1938, so just before Heinrich came. At first, Mirjam stayed in several of the homes for refugee children, all over the country. When Mirjam’s older sister got married Mirjam could leave her foster family and move in with her sister and brother-in-law. The three of them were taken to Westerbork in the summer of 1943 and in September Mirjam went to Bergen-Belsen. From there she was sent to Theresienstadt where she met her parents again. Together with her mother she went to Auschwitz, after which she was sent on to another concentration camp where she was liberated in the spring of 1945.
Last Monday, January 27th, Mirjam stood in camp Westerbork, on the place where she stood on rolcall for 3 months. Now 89 years old she is a fantastic and courageous woman. Incredibly strong. Even though she watched more tv than she should have on the previous day she got up there and read the last 150 names of this living monument that was erected at Westerbork for the fourth time. Heinrich only became 19-years-old. Mirjam fortunately did survive. She paid him, and so many others, a tribute by reading out their name. Heinrich Zysmanowicz was the last name she read. 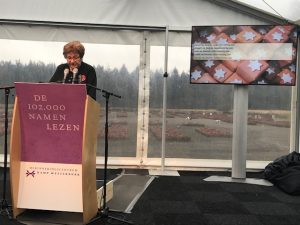 Like five years ago, I read as well.
Reading names in Westerbork has many sides to it.
First of all it is an honour to participate in this living monument. It is carried by 800 readers, people who come from all over the world, Jews and non-Jews, girls, boys, women and men. These people whose names are read, most of whom died a horrible death in the gas chambers, in most cases have stood at this same spot, at the Appelplatz. Sometimes maybe only a day, sometimes months….. their names were called right here.
I put a lot of thought into how I wanted to read the names. You can whisper, you can shout. You can be sad, or angry. In the end I didn’t choose beforehand, I just let it happen. The only thing I wanted to do was look up as much as possible.
Apart from being an honour it is also torture. I was extremely nervous and even nauseous the whole day leading up to it.

Time flies by and stands still at the same time.
After five minutes I thought I couldn’t keep my concentration anymore, I was afraid I would start making mistakes. But when it was over, I was disappointed and felt I could have gone on for another hour.
Standing there I wanted to pronounce all the names the right way, read the age the right way. But I also wanted to stop reading and scream “please, people, hear, listen, understand that this has happened….
Or, as Primo Levi said:
“These words I commend to you.
Inscribe them on your heart,
When staying at home and going out,
Going to bed and rising up;
Repeat them to your children:
Or may your house fall down,
Illness bar your way,
Your loved ones turn away from you.